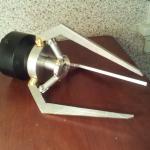 I'm very new to this site but am very interested in stepping out the bounds of this body of mine. As a bit of history, I'm a bioengineering student planning to work to improve prosthetic limbs, so implants and human physiology are what I learn about every day. Getting a magnetic implant seemed like a logical step in the right direction. I also plan on getting involved with the circuitry interfacing side of things as well, with a Bottlenose type device in the making already.

So I paid for a set of magnets from a fellow forum user here and while waiting for them to arrive, set about finding someone to put one in me. As luck would have it, just as I entered the first tattoo parlor on my list, a man with numerous body modifications was getting set to leave. When I asked the lady at the front if the shop did magnetic implants, she said no but that I was in luck. Wouldn't you know it, the modified man was a modification artist and had not only experience implanting magnets, he had his magnets and operating kit with him (even though he was only passing through while traveling and selling his jewelry)! He asked if I was ready to get it done then and there, and how could I pass that up? The tattoo shop we were in let him use one of their stations and the next thing you know he had the magnets sterilizing and the finger site prepped and ready. Maybe 15 to 20 minutes later I had a magnet and two stitches in my finger, with no pain and no fainting (reasonable concerns).

Its been about 6 hours since then and the feeling is starting to return, but with only marginal pain (similar to several hours after you had smashed your finger, I suppose). If there is still anyone on the fence about this procedure, I would like to assure you that there was little pain during this particular operation and that the aftermath is so slight I would have no second thoughts about doing it again, even in multiple fingers at a time! Typing without my left ring finger is odd, but that's what pinkies are for.

I have added the guy's contact info to the relevant wiki page, and if any potential grinders are in the Seattle, Washington area I highly recommend John. It turns out he was friends with Steve Haworth when he first began experimenting with magnets, so even if you aren't getting a body mod done he is still great to talk to and learn about all this stuff.

I'll keep posting here with updates when things start happening. This is such a great community and resource, I just can't believe my luck with finding this site and then running into an experienced implanter after deciding a magnet was what I wanted! I only hope I can be as helpful as so many of you have been.