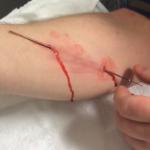 aviin
June 2016 edited June 2016 in Coatings, transdermals, other implants
I've been looking on and off at this for awhile now and while I'm not sure it's something I want to try, I'd like to get some general feedback.

Suppose a person were to take one of these Sandisk Connect Wireless Sticks (and here's a manual for one for reference), tear it down to see if the size could be reduced at all (thickness could certainly be reduced by removing the outer case), swap out the power button with a reed switch, permanently connect an induction charging receiver into the (trimmed down) usb connection, and coat the whole thing in silicone (probably adding back all the thickness saved by removing the outer casing, sadly).  The idea being that you'd have implantable wireless data storage with already existent support applications for mobile devices (iOS and Android) and PCs.  Everything in a neat, nearly off-the-shelf package.  I know that many people won't see a need for such a thing, but it is a thing I want regardless.  200 gigabytes of implanted storage.  That's 40 more than Johnny Mnemonic and no need to dump any longterm memory to do it ;)

Where are the downfalls?  Things that come to mind are: Anyway, it's just an idea I've been bouncing around in my head for awhile.  I would love some input, whether it is suggestions, condemnations, or whatever else.