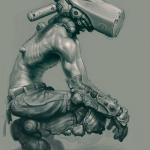 May 2015 edited May 2015 in Community
We will be talking at the Transhuman Visions conference in Oakland on July 12th. This means that some poor soul decide that it would be a good idea to get us up on stage and talk to a bunch of hardline transhumanists in the Bay area. What could go wrong?
I know it's short notice and that it's on a Sunday of all things, and that people have real jobs, but if you are in the area, you should come by. Zoltan Istvan (el Presidente ;) will be there, as well as a bunch of really big news crews (Al Jazeera, some people from France, maybe Americans...). It's an excellent chance to both meet up with fellow grinders, and sit in the parking lot talking shit (Just basing this of the last trans. vis. conference we attended...)
Now, they invited us because they think my eyes are pretty, but I think we have a lot to bring. Properly the same thing we always discuss, Action and Access.
So, I was wondering if anyone here on the board could maybe talk a bit about some of the stuff getting done. If we're standing up there pointing fingers, it's best if the finger doesn't end up getting pointed at us, yknow ?  :)
Tagged: