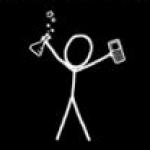 nukes2all
January 2014 edited February 2015 in Everything else
What would the prevalence of, say, a bot that could bring you something at the click of an internal button be? using small chips (RFID or otherwise) may work. What's your opinion?
Tagged: