I think it's time i sat down and gave a little writeup for the knowledge and questions. >3<

NOTE! Yours truly is very shy. Sorry, there are many pictures, but too shy to post most of them. >3<

So, yours truly acquitted a V2 firefly, and it's been successfully implanted into my face, below my right eye outside of the socket. ^^ 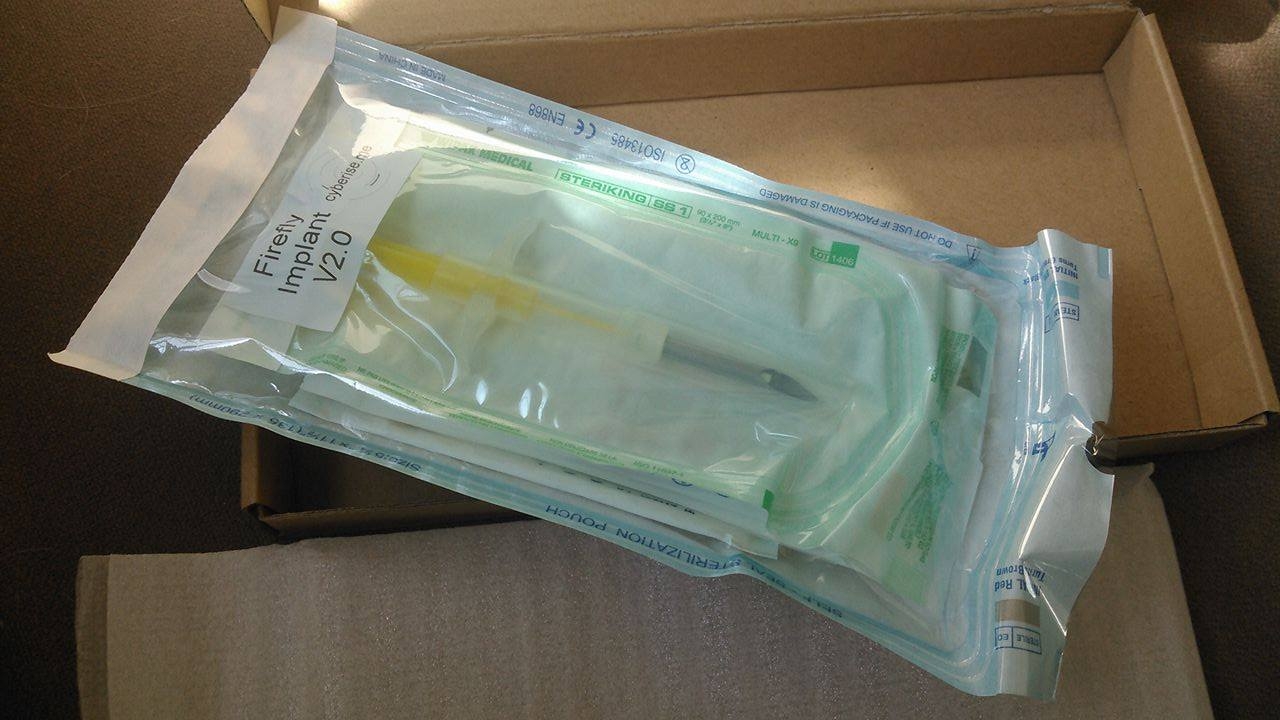 The procedure was a bit intimidating, I have never done an implant on myself, this is my first one. :3

So, I began by acquiring tools! :D

Ended up acquiring a set of X-acto blades (in lieu of a proper scalpel) and found that the curved blade in this specific hobby pack resembled a #10 scalpel blade, and used it in tandem with the #2 blade. The rest weren't used and ended up being discarded, though having them handy was more tools in the box. ^^

A pair of small hemostats, a pair of small stainless steel sewing scissors, and a common generic steel pick were also used. All were kept in said glass tray filled with 92% Isopropyl alcohol, following @aviin's example in his video. Full credit, liked the idea. :o

Many many gauze on hand.

Began by preparing the area and cleaning up, getting a nice little spot to work in my little bathroom. Not ideal, but the best I had. Ended up scrubbing hands and face with Chlorhexidine, then doing a lot of drawing on my face with a pen, sketching around and finding my angles, Where I wanted it.

Applied a liberal layer of topical lidocaine, followed by an occlusion (clingwrap) for about 15 minutes. I am not sure if it had much effect or use, but It helped me move on more comfortably, if nothing else, under placebo. I have a very skewed perception of pain regardless, because of a certain chronic disease. x3x

After enough hesitation, ended up making a vertical incision on the outside of my face, approximately 1.5cm long, using the #10 scalpel blade, and used the point of the #2 blade to finish piercing the skin through the dermis.

Used the incision to help get the needle started, again, I am not sure how much/little it helped, but honestly it seems to have been beneficial for myself. The needle was quite large, going in from the outside of my face diagonally down to the inside. It took a long time to get the needle the amount it went, A lubricant would have potentially been very useful. I was EXTREMELY wary of accidentally pulling an Aviin and making a tunnel... Also, there was a mild amount of unease sticking this giant injector into my face. It took a little bit of will to keep going.

it took about 30 minutes of slow pushing to get the needle in as much as I thought was enough... More on this later. very carefully began depressing the plunger while withdrawing the needle... and found the plungers rod had slipped past the implant and not actually completely ejected the firefly from the needle.

Withdrawing the needle took the half-ejected firefly with it. It was a little bit of a panic to get the Firefly back into the injector (hands were slightly shaky from simply stress and nervousness, pain was negligible), and the injector was both covered and slightly full of blood. there was also a decent amount of blood going down my face at this point.

Now, after pulling the injector free and dedicating attention to face, found that I had not gone quite deep enough for comfort... The edge of the firefly was approximately 1-2mm away from the edge of the incision site! D:>

Ended up cleaning up the site, five or six times, with gauze and iso to observe the situation between blood flows, and decided it would be best to try to get it built up as much as possible. Ended up using hemostats to hold both sides of the incision together, quickly wiped it clean, and ended up drizzling a line of Loctite down the incision. It beautifully sealed the site! :D it also almost glued the Hemostats to my face, I almost didn't get them off in time before it started adhering.

So, the hard part was all done, and I was a little burned out from stress and nervousness. Total time elapsed was approximately 90 minutes. ;^; 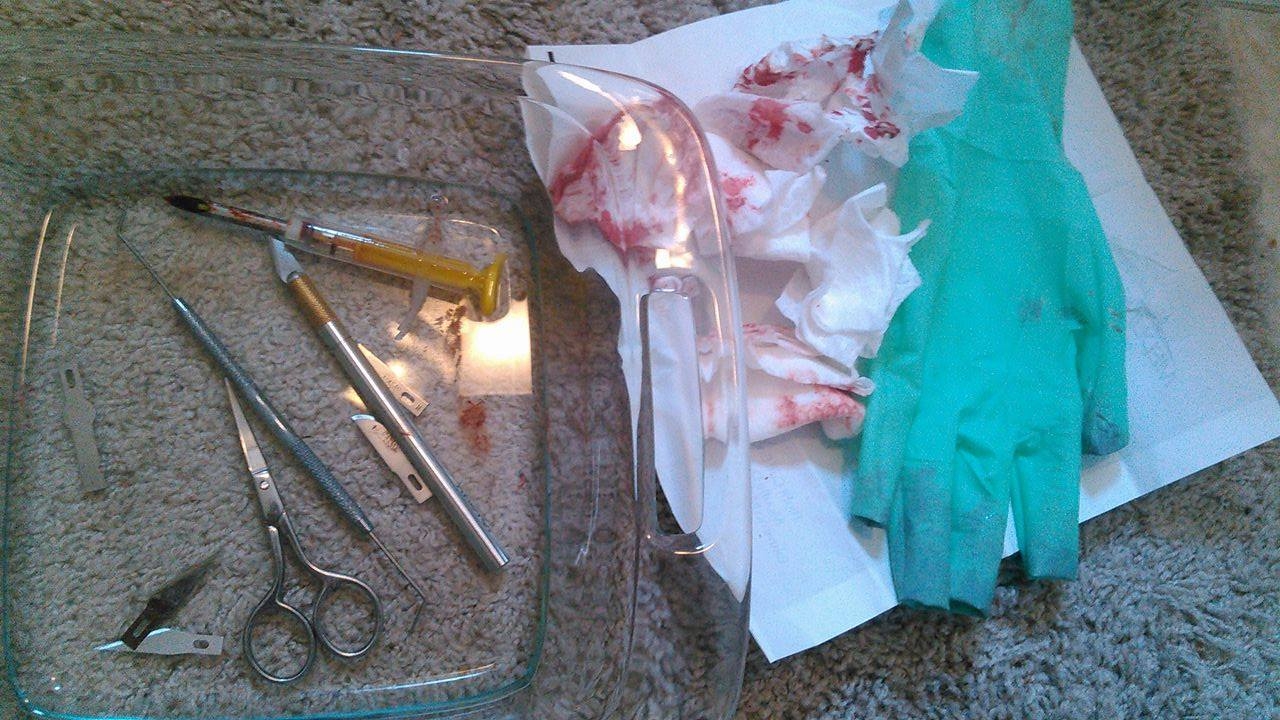 This is where things get a little more complex. Aftercare did not go as planned at all.

So, after about 6 hours, ended up going back to clean up and examine the results thus far, in regards to the incision. peeling the Loctite off was a little difficult, and underneath was the cutest little clean healing cut ever. I was absolutely thrilled, it was nothing.

Then I made a bad mistake. I reapplied another layer to replace the layer I had just taken off. And I used a tiny few spots on a small gause to adhere it over the site to keep it clean and stuff...

This left four burn marks on my face from the adhering sites, and the second later of glue ripped of a layer or two of skin and burned the skin around the incision. I had a dark bruise under my eye for about a week, resembling a black eye, as well as 3 other distinct burn marks, and the actual incision was... The skin was all kinds of irritated, burned, trying to seep little bits of clear fluid from the incision.

This was a very annoying fight for the next week, though bandages and triple antibiotic ointment saw me through quite well. ^^

The implant never tried to reject or get pushed out of it's pocket. Thank you for the prediction, @Cassox. having reassurance is always nice.

I've also had a VERY bad habit of playing with it. :c