Mildly offtopic for this forum 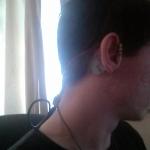 garethnelsonuk
November 2015 edited November 2015 in Everything else
I recently got into an argument with someone on the subject of strong AI - he claims it's impossible and always will be, I claim that getting human-level intelligence could be done using brain scanning and simulation at the very least and made the argument here: http://pastebin.com/sM2PiK7u
Of course i'd also argue that implementing AI using a simulation of a brain is horrendously inefficient, but it should still in fact be possible to do given enough time and resources.
The guy I was arguing with outright refused to point out the flaws in my argument (and I can think of a few myself even - none that can't be defended, but still - there are some criticisms that could be made) so i'm wondering if anyone here has found an actual compelling argument against the possibility of strong AI.
Tagged: