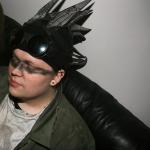 gbit
October 2015 edited October 2015 in RFID/NFC
I had my 2 implants done in August and we had a video camera there, so we decided to film it (it wasn't preplanned, just something we decided in the moment). Yesterday I met my friend who did the implant for me and got the footage, so I edited it down and uploaded to youtube.

It doesn't feature any explinations or talking (just groans by me and the body mod artist laughing).

In hindsight, it would have been cool to talk about what's going on but, I guess I'll just do that for the next implant